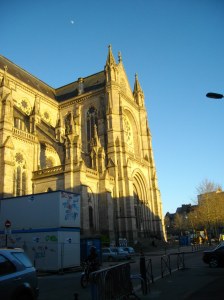 April in Rennes, by TGE

Angers, Nantes, Saint-Nazaire, Brest and Rennes are associated within the Metropolitan Area Loire-Bretagne (PMLB). Cooperation between the major cities of the West is not something new. It has been on-going for nearly twenty years, more strongly since 2005, when these towns have strengthened and developed the Metropolitan Area Loire-Bretagne as a further step in the cooperation process already underway.

The Metropolitan Area Loire-Bretagne was born of the call for metropolitan cooperation launched by Datar (the French authority in charge of territorial matters) in 2004. It organizes the cooperation of the cities of Nantes, Saint-Nazaire, Angers, Rennes and Brest. The five urban planning agencies are involved, making joint studies.

This exploratory and support role of the agencies has been confirmed by the proposed transformation of the informal cooperation in a metropolitan area, reflecting the ambitions of the local entities in the areas of research, higher education, innovation and all other matters that may contribute to the European and international positioning of Western France.

Since February 13, 2012, this union is official. The PMLB was launched in Rennes, where the headquarters of this new cooperation are structured on the model of a mixed union.