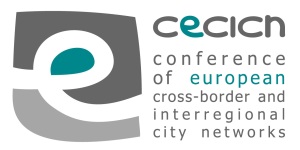 The meeting started by a point on the past activities of CECICN. On 27th September, CECICN, represented by J. Peyrony, intervened during the 22nd meeting of the working group “Territorial cohesion and urban matters” (TCUM) of the European Commission.  The meetings on the 15th November with DG REGIO and MARKT were also mentioned.

MOT informed the partner networks of the launch of the Cross-border networking group of the European Parliament, on November 27th. CECICN welcomes this new initiative, as every approach and entrance to EU institutions in favour of Cooperation is interesting for the work of CECICN and should be used as a lever. It is decided that CECICN will propose a joint meeting of the Political Bureau and the networking group linked to the next meeting of the Political Bureau foreseen in March.

The CECICN strategy 2013 – 2014 is presented in its big lines. As introduction of the document the two main objectives of CECICN are reminded: CECICN acts as intermediate agent between the local and the European level and is a promoter of Smart cooperation.

Aligned with these objectives, CAAC coordinator, Ms. Tamara Guirao, presented a communication and marketing strategy based on:

Key concepts for excellent communication for ETC urban networks like CECICN’s are coherence, coordination and good information management. The work on the Joint Documentation Centre will be continued.

CECICN members engaged to continue their common work through:

*** In parallel, CECICN’s president met with the Committee of the Regions.